In December
Wings can not cut the cold night and take flight.
Instead the bird will fall where the dark ones wait. 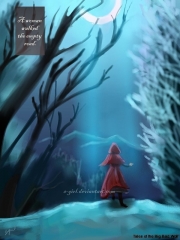 In the northern lands, the first fall of snow came early. In those woods, a woman walked the empty road. She was a dash of red that moved against a pale scene of trees, snow, and sky. The sound of her steps across the frozen dirt was crisp. They broke the silence of falling snow, causing the woods around her to stir restlessly.

There had been no one on the road for hours. Those who preferred the gentle predictability of spring, the plentiful harvests of summer and autumn had long left on these roads. Those types would winter in the warmer lands by the southern seas.

And yet she continued, her back to the south, her steps facing north — like a brown eyed, brown skinned bird caught in a frozen wind. She sang a strange little nursery rhyme quietly under her breath, not knowing that it had been a lean fall and an even more punishing winter. The trees around her were rubbed raw. She did not recognize the signs of hunger.

She had not been in the Northlands for years.

While the cold began to wear her down, the young woman counted the minutes it would take to reach her destination. She had been told if she had walked straight north down the road from Crossroads without stopping, she would be at Winchester in time for the evening dinner. From there it would be another ten minutes to her grandmother’s home. But the shopkeepers in Crossroads had misled her. They could not have possibly known that the many hilly parts on said road would have iced over and could not be traversed as quickly as they had promised.

And so when the sun had set, she found herself caught in a dark part of the woods, far short of the town she sought. A howl sounded faintly in the distance and she was additionally surprised. The townspeople had neglected to warn her of the larger things that dwelled within the forest.

She had not used it yet; for once the gift was used, it would not work again so soon. The young lady put the temptation out of her mind and compelled herself forward; if she could reach the bridge south of town, her grandmother’s retainer should be waiting to help her. Beyond that bridge would be the village and beyond that her grandmother would be waiting. She held this thought in her mind, using it to sustain her courage while she kept walking.

However, when she came upon a clearing before an open bridge she found no one there. Only a stone lion statue waited, yawning indifferently at travelers as they passed by. She tried not to panic as the howls drew closer. She clutched the gifted pouch to her side and picked up her pace towards the stone guardian. She had been told as a child that it had been placed there as a protective ward against malevolent beings. If there was any truth to that story, she wanted to be behind it.

Across the bridge she went, trying not to slide on the slippery snow as she did so. The growls were close but had stopped moving. She tensed slightly but kept going. She did not wish to confirm if the beasts she heard were following her.

She finished crossing the bridge when she heard the growls again. They were now angry, attacking barks.

The hairs on her neck rose as the barks melted into anguished yelps. Her heart beat quickly, and she feared what the dogs or wolves had discovered. She strained her ears, listening.

Then came another sound, an ominous snuffling and crunching noise — a sound of bones being broken and dogs screaming as if they were being torn apart.

Her feet moved on their own. She quickly passed abandoned houses along the road, her thoughts flying back to the stories of the Shadow things, or the Unthings, as Grandmother had liked to call them.

The storytellers had claimed they appeared in the woods shortly after elves  withdrew from the area, many years ago. They would come at night at times when there was no moon. These creatures of emptiness craved flesh and spirit and consumed both indiscriminately. Unlike other creatures, they did not respond to weapons or fear men. Only light and their slow speed would allow a lucky traveler to evade them.

In the summers she had passed here, she had never seen one and so had come to agree with the common sentiment that they existed only in tales. Even if they were to exist, none should be found on a night with the moon shining brightly. But if that were an Unthing, what must she do?

Logical thought asserted itself. She needed light, a lamp, something to force that thing away should it come for her. She paused at a gate where lanterns were lit. It would be rude to try to force her way in, but her anxiety to escape the road took priority.  She glanced behind her towards the bridge – where she thought a large shadow lingered by the stone lion. Her hands forcefully shook the gate.  It swung inward without warning and she stumbled inside.  As soon as she had recovered, she instinctively slammed it shut behind her.

She took a deep breath after she secured the gate and tried to understand what she must do. She looked down what appeared to be a slightly cleared path; lighted buildings stood at the other end. Her feet started to move her towards them as there would surely be someone here to help her.

She had not gotten very far when her boot carelessly caught a bit of ice, sending her into the snow and scattering apples in her wake.

For a moment, she forgot that she was trying to flee something strange that killed wild dogs. She looked at the ground horrified. The apples were precious items, intended for her grandmother, waiting for her at the end of this strange evening. There wasn’t any fruit to be had in these parts this time of year; to lose these would be a blow for her ailing grandmother.

She made an undignified picture sprawled over the ground as she tried to pick them up, making haste to retrieve them, but trying hard to finish. Too late, she noticed a warm flickering color on the white snow, and a slight shadow looming over her.

A voice like ice made her tremble. “Who dares trespass these grounds?”

Slowly, she turned her head to look up at cold grey eyes.

About this story — Table of Contents