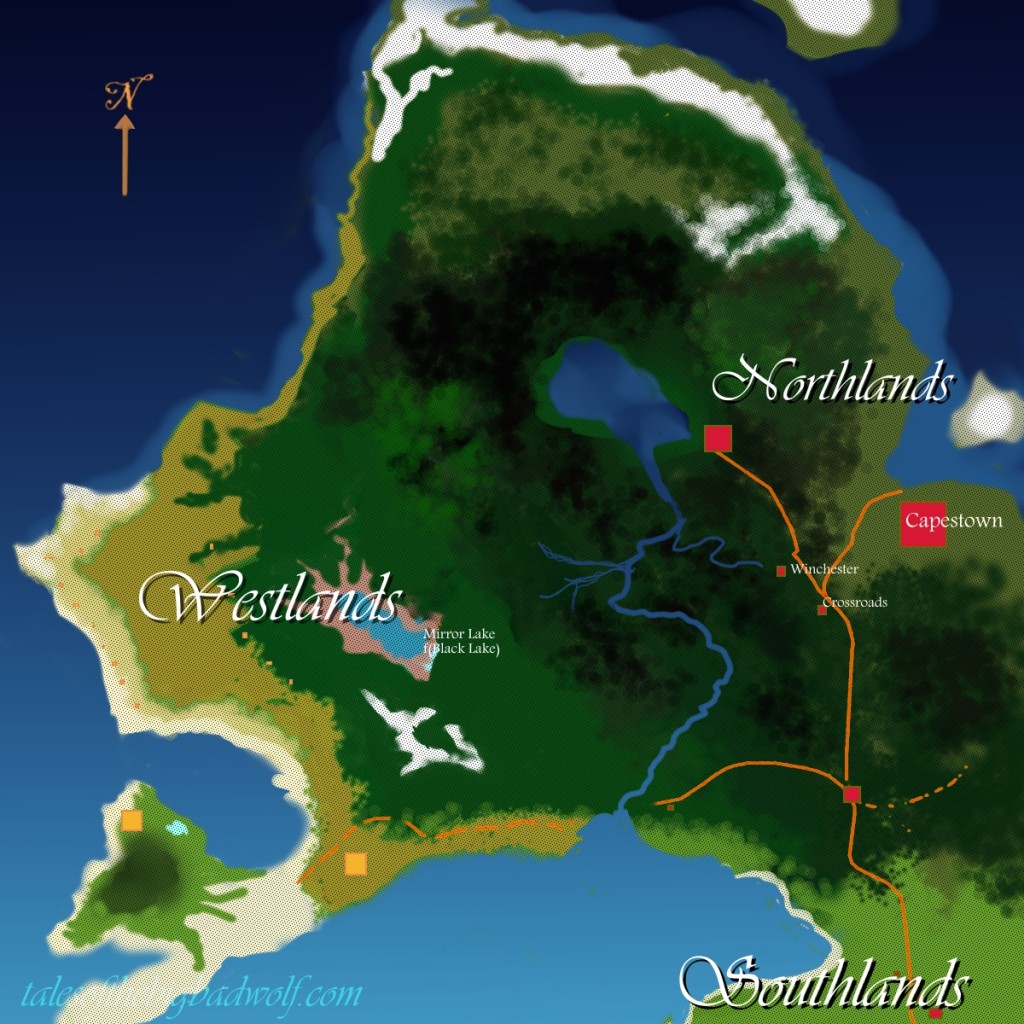 The majority of the humans in this continent dwell in the Southlands (not completely depicted), which is marked by a warm climate and fertile soil. The road (in orange) leads north from the Southlands towards the Northland territories. In the Northlands, several human cities are marked with “red” boxes, with the larger cities represented by larger boxes. Humans have not generally made many towns, as the dense woods make it laborious to do much construction and with a lot of water inaccessible, they have generally stayed towards either the Sea (where ships can take them out and around to other parts of the World) or near the Silver Lake, a large freshwater lake in the interior of the peninsula.

The roads do not go to the end of the peninsula, as there are rumored to be terrible things wandering that area, from Unthings to dragons, to other aberrations that some have called Ghosts or Dark Spirits.

To the West, humans have ventured only so far. They dare not build roads across the Silver River into what is accepted to be the domain of the Elves.

Elves have settled in scattered fashion in the Westlands (known towns/villages are marked in orange, with larger settlements represented by larger boxes). The Westlands are a difficult terrain, filled with dense woods and with dry terrain and sandy beaches further west. Humans have not visited any large towns, with the exception of Chassis — a southern port town in a warm sandy flatland not too far from the mouth of the Silver River.

According to old stories from the days when humans and elves were on friendlier terms, it is also believed that another large settlement lies further West. (In song it has been referred to as the Golden City, which will not be explained at this time.)

It is not know how many small elf settlements exist. It is also not clear how they are governed, although friendly elves in Chassis indicate that all settlements are self-governing on a day to day basis. It is not clear what the political structure is of the elves, but human adventurers who have wandered that way seeking out Mirror Lake (a small aqua lake in the midst of the dense woods) have reported that it appears that the Wood Elves are constantly crafting weapons of war.