Chapter Two: The Door of Hazel, The Castle of the Wolf

Knock at the door,
Pull the bell,
Lift the latch,
Walk in all’s well[*]

The snow continued to fall softly, erasing the crisp tracks left upon the ground on which they walked.

As for the walk itself, it had lengthened beyond what Elanore had expected. She had earlier failed to realize the building that she had seen from the gate at the road was not all that close. From there it had appeared to be a small building, but as she continued down the path it became apparent it was quite large.

The young lady took small steps to the Count’s large ones, trying valiantly to keep close to the man. She had not been brought up to follow strange men here or there but brushed aside her concerns. She had been told that surviving the winter in the north might mean learning to adapt to new customs and rules.

They went deeper down the path through the line of trees and bushes. Her curiosity about this place and the man who lived there only grew with her rescuer’s continued silence. In all the stories she had heard of Winchester she had never heard of this estate or its Count. Unfortunately, the walk thus far did little to reveal much about either.

When the path abruptly widened, she found herself standing in a courtyard of statues. Dozens of nearly identical stone lions sat in the midst of a barren, frozen garden staring back at the path. They were smaller copies of the stone guardian on the bridge.

The Count stopped next to the last lion in their path. For a moment, he placed a gentle hand on it before brushing off the snow that had collected on top of its head. When finished, he resumed his walk towards the closest house.

As she passed this lion, she also paused to look at it carefully. She studied it, trying to understand why it did not look like the others. It was, in fact, posed in such a manner that it appeared more lively than the others in the garden. Even then that did not explain the odd feeling it gave her. She concluded there was something remarkable about the way the sculptor had rendered the eyes before she hurried onwards.

The Count had eased his pace, allowing her to catch up to him. When she reached him he did not turn around while breaking his silence. “It is safer here.”

She noted the slight shift in his demeanor, the relaxing of his shoulders. She glanced about, seeing more of what surrounded her. She could not contain her sense of wonder at the lions behind them or the immense stature of the building she had seen from the road, now in front of her.

Elanore lifted her boots, shifting them back and forth as she stamped down the snow beneath her feet.  Her thoughts still dwelled upon the lion statues. “The stone lion on the bridge– you have others like it here.”

“Indeed,” he gave a hint of a smile, “One might say that they are its brothers.”

The young woman took a moment to openly glance back at the lions that lined the path upon which they had walked. The way the lions were aligned left a peculiar impression upon her. She began to count them as the man started to move again.

He stopped at the foot of a large door over which stood a wooden frame engraved with numerous images.

Elanore joined him, unable to contain herself as she openly marveled at the sight of such intricate and detailed handiwork. “It’s beautiful,” she said with both delight and reverence.

He, too, gazed at the carvings with something like pleasure. “It is a door wrought by the hands of the elves.” He pushed it open for her. “They call it a door of magic, made of hazel wood.”

‘Hazel – like the trees in fairy tales,’ Elanore thought to herself. As her eyes skimmed the carved images, she wondered if the images, in fact, been inspired from some of those tales.

Her eyes reluctantly left the door as she continued underneath that doorframe and into a large entryway. The young woman had only a moment’s opportunity to appreciate the vaulted chamber’s rich, dark interior before an ancient man stepped forward from the shadows.

He was impeccably attired and as elegant as the lord whom he served.  His gloved fingers swept the cloak from the Count’s shoulders and placed them in the hands of another elderly servant who had magically appeared from one of the many various-sized doors surrounding the entryway.

Seven servants in all gathered and formed a half-circle around her and the Count. Their efficiency startled her. But she took comfort in the kindly expression of the old man as he looked her way. In contrast to the sullen and unfriendly expression worn by her apparent rescuer, he seemed almost jovial.

Indeed, the elderly man was in near good humor as he broadly smiled at his lord. “Sir, have you brought home a young lady from your walk?”

Elanore felt her face warm slightly as a quiet wave of bemusement rippled through the servants.

However, the familiarity of the question did not shock the Count. Instead, it seemed to rouse him from his otherwise silent state. He frowned at his manservant. “I happened upon her while walking the grounds, Hastings. She was the source of some noises I heard near the gate.  It would seem there are shadows on the road that have chased Miss Redley on her way to town.”

The elder servant blinked at her, while the other servants looked at her with undisguised interest. “Miss. It is not wise to be walking on the open roads on these early winter evenings.”

The girl looked about, realizing that several of the more wizened servants were shaking their heads. She bowed her head in apology. “I was told in the last town that I could make it to Winchester before dinner if I hurried. I miscalculated. The roads were icier than they had indicated and I found myself caught outside after the sun had set.”

“Good gracious,” she heard one of the ladies mumbling. “Did they not tell you there was a coach you could have hired?”

Elanore was not certain who had asked the question but continued. “I was told that that they would not send it until the snow had stopped. They were wanting to wait a few more days. My grandmother is not well and I asked if it was walkable–”

“The Crossroads townsfolk are ignorant about the area and the dangers therein,” the Count interrupted with a frown. “We’ll have to make our warnings much clearer and warn them against letting travelers walk this way. Now–” he diverted the attention of the staff to other things. “Tend to this young lady, Hastings.”

“With the circumstances being rather unusual, it would be best to accommodate her until it is light. The roads will be much safer for travelers then.”

“I’ll take my leave then. Good evening, Miss Redley.” The Count abruptly turned on his heel and disappeared down one of the various hallways.

Elanore could not hide her astonishment at the suddenness of her host’s departure or the immediate scattering of the servants back through the many doors into the entryway. “Did I do something to offend them all?” she wondered aloud.

Hastings coughed, reminding her that she had not quite been left alone. “The master does not like his staff to loiter or to indulge their curiosity. They know to leave you be. As for the master, he does seems rather unsettled, Miss.”

“I do not mean to impose,” Elanore spoke gently. “And I regret that I have disturbed him.”

“Ah. It’s not that, young miss.” Hastings took a moment to dust the snow from her cloak before taking it in hand. “It’s the bit about the shadows. Haven’t ever heard of them coming this close to these parts. Most of us have never seen them.”

“Neither have I.” Elanore found herself warming to the older gentleman. Although he was a bit blunt and exceptionally curious for a butler, compared to his master, he was congenial. “I wasn’t even sure if it was one when I saw it, nor did I know exactly what to do.”

The man chuckled. “Rarely does one know what to do when faced with something strange. And there is no logic to those things, I’m afraid. ”

She frowned at the ease in which he accepted the situation. “Is it true they eat up anything?”

Hastings pondered her question for a moment. “I’m afraid I do not know anything more than what the stories say. You’ll have to ask the master. He knows far more than any of us. Now–” he cleared his throat, “–we must pay attention to other matters.” He began fussing with her cloak. “Please follow, my dear. We will get your things dried and a meal sent to your room.”

Elanore quietly followed him down a maze of hallways, past kitchens and storerooms. She could not tell exactly where they were going. They entered a building that Hastings explained housed most of the servants during the winter.

The butler shifted uncomfortably as they neared the service staircase. “I apologize that we are not able to put you up in more elegant quarters, but we close rooms that do not get enough heat. This building is the newest and easiest to heat in winter. It will be most comfortable for you here.”

Elanore was not used to finery or knowledgeable regarding the social conventions of the Northlands, so she did not mind the breach of protocol that so worried the elderly manservant. As he opened one of the doors at the top of the staircase, she stepped into a modest but warm room and looked about, pleased.

Hastings followed her inside in order to tend to the fire. Again he seemed intent on apologizing. “As for the master, please forgive him. He has a tendency to seem impolite, but he has much on his mind. Your experience on the road likely troubles him, Miss.”

She spoke good-naturedly to the older manservant, wishing to assure him that she was not offended or ungrateful for what she had been offered. “You are all too kind. It is I who has imposed upon you all in such sudden and unexpected fashion.”

The older man smiled cautiously as he assisted her with removing her scarlet cloak. “If there is something strange about our manners, please do not think less of our master.  We do not receive many people, I’m afraid.” He paused for a moment. “And our lord is a solitary person, unused to more cheerful society.”

Elanore smiled slightly. “I will try not to judge him harshly. But I will also not try his patience.”

Hastings bowed in acknowledgement. “One last thing, Miss Redley. And it will also seem rather impolite to mention this–”

“In general, the staff does not wander at night. The master tends to prefer his solitude and all that. Miss Redley if you would—”

The young lady inclined her head. “I will not trouble you all and keep to my room.”

The butler seemed greatly relieved to find the woman so agreeable. “I shall have one of the ladies bring you a warm meal here. She will be nearby if you need any further assistance.”

Elanore nodded, wondering exactly why he was so concerned that she might leave her quarters. She did not ask for more information. Instead, she bowed graciously as he put her cloak away and retired from the room.

When he left, Elanore went to the window and stared out into the snowy darkness. 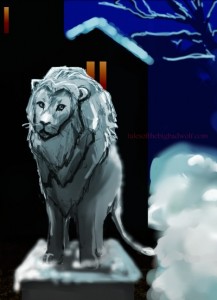