The early morning light woke Elanore. She rubbed her eyes before pushing herself off the chair that she had fallen asleep in and pressing her nose against the glass window to look outside.

When she realized the creature had disappeared from the bridge, the quietness of her surroundings took on a potentially sinister meaning. She turned her attention back to the door, wondering if the thing had captured the sleeping inhabitants in this house.

Her fears were alleviated when she began hearing steps outside her door and the sound of activity from the floor below. It was a maidservant who came to her door shortly thereafter with the news that it was safe to make the journey to town.

Elanore, in much lighter spirits, allowed herself to be hurried downstairs where the servants set before her some breakfast. As she watched them scurry about, she sensed they were somewhat anxious to have her depart.

If this observation saddened her, she did not show it. Instead she went graciously and quickly about finishing her meal. She, too, was eager to be on her way. After all, her grandmother was waiting.

She had just put on her cloak when Hastings suddenly appeared at the table and asked for her to follow him. “The master wishes to speak to you,” he explained.

She had not expected to see the Count again; their encounter the previous evening had given her a strong impression that he was the type who would have better things to do this morning than deal with a trespasser on his property. However, Elanore gathered her things and dutifully followed Hastings through a labyrinthine maze of hallways. He moved so quickly that she could not keep track of the path they took, but she was certain she was being led downstairs.

Hastings stopped for a moment to pick up and light a small glass lamp. The young lady in the red riding hood looked about, confused as they continued slightly upwards. She could feel air flowing at them from somewhere — air that was chilly and damp.

Hastings stopped before a non-descript wooden panel and placed his fingers somewhere upon it. The panel clicked and suddenly swung inwards.

Elanore suddenly realized the precarious position she had placed herself in by allowing herself to be led so far away from the house. She took a deep breath before stepping through this newly created door. The panel shut behind her, and she froze, tightly clutching the basket in her hands as she stood and looked about a dimly lit chamber.

To her surprise, the room was warm and fragrant, carrying a faint smell of spice and tobacco. Her eyes caught the weak light from a lamp and a fireplace.

She took one step forward into what she presumed was a study or a parlor of some sort. She was relieved it was that and not a dungeon. With her fingers slightly outstretched, she inched cautiously around a large table scattered with scrolls and various compasses.

With no audible response to direct her, she moved timidly towards the fireplace. Her progress was slow thanks to the mess of books and oddities scattered all over. But once there, she stood in front of the fireplace, warming herself and enjoying its soft light.

It was odd how at ease she felt here in contrast to the rest of the house. Whereas most of the rooms she had seen had a severe look to them, this room’s cluttered nature seemed to lend it an air of friendliness that was lacking elsewhere in the home. Her opinion of the Count began to thaw slightly.

She spent several moments looking at the paintings that surrounded the fireplace. Her eyes passed over a painting of a feast with three roasted pigs, past several paintings of those she assumed were family, until they rested on a portrait that was partially covered by a dark cloth. She wondered whose face might have been painted there.

A polite cough from somewhere within the room interrupted her thoughts. “My grandfather had poor taste in paintings, I’m afraid. He was obsessed with pigs and insisted on adding that ghastly image to a wall of otherwise distinguished subjects.”

The sudden comment startled Elanore who could only gasp out some triviality. “They are intelligent creatures, I’ve been told.” She looked around for the Count. Finally, she found him reclining in an ornate and old-fashioned chaise hidden behind the table she had passed earlier. Elanore realized she had been standing there the entire time in the Count’s sight.

“That’s what he said as well,” the Count answered as he sat up, his eyes glittering with some untold amusement. “But they were apparently not intelligent enough to avoid becoming dinner.”

She was puzzled by the comment but did not ask exactly what he meant. She was far more disconcerted by the expression on his face. “My apologies for disturbing you here in your personal quarters. Hastings sent me here before I was to take my leave. Your servants have said the road is safe.”

“Safe to a point.” The Count shut his book in a perfunctory manner. “The sunlight took care of that thing from last night. That said, you already have had one particularly odd experience. I would not rely on daylight to ensure that the strange events will not continue.”

Elanore politely averted her eyes to avoid looking directly back at him. “I am now aware of the risks in this area. But I do not want to impose on your hospitality any further and it is important that I must leave.”

“Your grandmother, was it?” He discarded the book in his hands before coming to stand beside her. “She lives in Winchester, I take it.”

“Yes, sir.” She grasped her basket more tightly with one hand, and closed her cloak with the other. “She was married to the mayor there, but after he passed away, she lives alone. She has no one to look after her and her health is ailing, so I’ve been sent to care for her by my mother and father.”

The Count picked up a metal poker.  With it he adjusted a log in the fireplace before he spoke again. His voice was a little less chilly as he addressed the young woman. “I had heard of the Mayor taking ill. I had no idea that she had family to the South.”

Elanore turned her gaze back to the fire, her voice soft as she dwelled upon her grandmother’s situation. “We would ask her to come south if it were any other time of year, but it’s much too cold to move her.  Moreover, she is too responsible to leave until a new Mayor can be sent to Winchester from the capitol regions.”

“No traveler will come this way from the East until spring,” the Count spoke authoritatively.

“No, they will not,” Elanore acknowledged. “This region is not important to them.”

“It has never been important to them,” he responded bluntly. “There is no wealth to obtain, few crops to harvest, no fishing and little trade.”

“That is what grandmother said as well.” Elanore turned her head to look at him. “It seems you think alike. Perhaps you are acquainted with my grandmother?”

He tapped his gloved fingers together and shook his head. “Not personally. Even so––” he shifted the topic. “I’m familiar with the home that she resides in. With these conditions, you are still almost an hour’s walk from your grandmother’s home.”

“I should be able to walk that distance easily if the shadows are gone.”

The Count raised an eyebrow. “While the shadows seemed to have dispelled in the morning light, there are still wild animals about now. I’ll have a carriage convey you to town, at least. Beyond that point to your grandmother’s home, no animals or other things should interfere with your journey. ”

He was alluding again to the Unthing.  Elanore could not help but be curious. “Did you see what happened to it? I had tried to stay awake to see what it would do and what would become of it–”

Something akin to amusement flickered across the man’s face. “But you fell asleep.”

She nodded, embarrassed. “I had overestimated my power to stay awake. Thankfully nothing happened.”

“Indeed,” he looked back at the fire. “But yes, the creature faded away into nothingness when the sunlight found it. It is certainly gone, and it is certainly safe for you to continue forward now.”

“Without your assistance, that would not be possible. I am grateful for it, as I’m sure my grandmother will be once I am able to tell her–”

“Ah,” he grimaced slightly. “If you would, Miss Redley — please do not mention this help to her at all. Northlanders are notoriously proud and concerned about appearances as well as favors given by strangers like myself. It would be better to say nothing of this.”

Elanore was taken aback by the request. But she saw the slight frown on the man’s face and had the sense not to push the matter further. “Then I shall mention nothing of having met you to my Grandmother.”

A long silence followed, ending finally when the Count cleared his throat. “I think it’s best to send Hastings with you. He has some business in town. It would be easy to give the appearance that he saw you upon the road and wished to provide a ride.”

She nodded, accepting this suggestion. At that moment, Hastings magically reappeared at Elanore’s side. “My apologies, sir, for being delayed. The driver was sleeping.”

Elanore wondered at the older gentleman’s ability to appear from nowhere at the most convenient of times. It was apparent that the audience was over, but in spite of Hastings’ apparent readiness to leave, she belabored over the matter of how to appropriately thank the Count.

It pained her to think that his services would go generally unacknowledged by her grandmother. He might not permit himself credit but she thought he might accept a gift instead. However, she had nothing to freely give other than the apples she was carrying in her basket. It was an embarrassingly humble offering, but she turned to him and pressed a few in his hands. “If there is anything I may do to return the favor, please let me know.”

He looked down at the apples, somewhat startled by the gesture. She withdrew her fingers quickly from his hand, wondering if she had violated yet another unspoken protocol.

“There is something I’d like to ask.” He shifted the apples within his hands.

He furrowed his brow thoughtfully and turned his gaze upon the mantelpiece. “Tell me, how are things faring in the Southlands where you come from? These apples are out of season are they not?”

It was a strange question, but she gave it honest consideration. “In most years, they may be, but it has been a very warm and long spring and summer thus far. Overall, it has been a good year for harvesting. Our yield has been significantly better than most years. Many families are migrating to the south, looking to share in some of that plenty.”

“Where one suffers, the other prospers,” the Count said to the air.

Elanore blinked, wondering what was meant by his comment.

“My apologies, I was simply recalling something of an old wives’ tale.” He turned his attention away from the wall above the fireplace and bowed politely. “I shall not detain you any longer to satisfy my own curiosity. A good day and good health to your grandmother, Miss Redley”

Elanore bowed in return and allowed Hastings to guide her out.

They left the Count alone in his study, frowning at the apples. 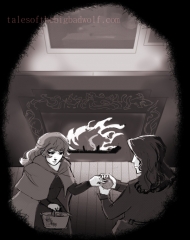