There are several major drivers in this serial. The first is that throughout its telling I wanted to draw contrasts between people and their beliefs.   Aside from the culture clash that comes into play here with men vs. wolves, old vs. young, there is also a question as to whether fate hangs over peoples’ heads.

Is it true that there is no story that hasn’t been told before? And, if yes, are people simply reenacting these stories with endless variations?   This is where every main character in this story has an apparent point of view and reacts accordingly.

Although this arc is named for Red Riding Hood, it was always intended to be a story about the triad of the girl who wore the hood, the hunter who “saves” her, and the Count. In the end, the twist is that she saves them and needs least changing.

The core tension has always been intended to reside between Edmund and the Count. When I started painting them long time ago, the two were always going to be interested (to some degree) in the heroine (Elanore) and always would end up in opposition. Edmund was always designed to become a rival for the Count and become a “wolf” symbolically, but once the idea moved away from the comic it became much more fun to draw out the conflict as one not based on romance but something else. 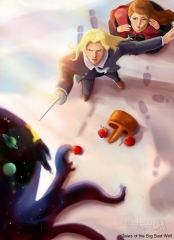 The problem with the comic treatment was that a romantic triangle as the main  driver for conflict isn’t really enough to drive meaningful character interaction.  Having written a novel length fanfiction on the premise of a romantic triangle, I discovered you can only have it go on so long before the heroine herself becomes partly at fault for being so indecisive, everything that happens ends up serving the romance triangle, and the camps who support various pairings get really entrenched and bitter at the outcome. Ultimately, it was better for the characters to have other things to occupy their minds and talents, so the serial moved away from having the triangle at its core and explored the theme of love heavily.

Elanore’s character generally thwarted my attempts to trap her into scenarios. She was too sensible and kind to allow stupid things to happen. In the end, Wolfram really stopped playing with her seriously (aka he got hellishly distracted) and moved on.

Back to the balance of the cast … outside of romance, one of the things that is rather ironic about this story is that inadvertently at first, it seemed like the older had much to teach the younger. Now in hindsight it appears that being older didn’t necessarily mean  being wiser. In fact, the young ones like Elanore and Edmund were more often “on the side of sense” while the others needed to be dragged around to do the right thing.

As for that initial philosophical question every character thought about at some point — were the young ones right to not worry so much about fate?

I can’t say. But the Count has clearly shifted his thinking towards that of the younger generations.   Whether he stays in that frame of mind remains to be seen.

Dissecting and acknowledging the various fairytales/myths

In a story arc based on  “Red Riding Hood,” there of course is the expectation of delivering a literal Red Riding Hood, the Wolf, and the Hunter.  (These were not the first of their kind, however, and the Count knows of at least one other iteration that was described in the Book of Tales.) In a more categorical sense, those three personas are also represented by the townspeople (behind Elanore and her grandmother), the wolves (Wolframs) and the Hunters (sort of) as represented by Edmund and the guildmaster, Wilhelm.

The spoilers in this conflict, of course, are the lions and Ilva who break the triad open to influence.

There are a number of arguable allusions to other fairy tales, myths, and legends.
In no particular order and not necessarily exhaustive

Initially the elven healer that Wolfram met on the failed quest west was going to have more of a romantic footnote in his history.  He was going to fall in love with the woman,before he got tricked by the Sea Witch who ate her to assume her appearance and then seduced him, all followed by years of torture at her hand.  (Pleasant, right?)

But a few months in when I was breaking away from the early 16 chapter treatment I had an Ilva whose purpose was to eventually become his stand-in.  (Her relation to the clan and her magical powers would allow her to assume control of the Wolframs for various reasons.)   At the end of this shorter treatment, Ilva and Giles would develop a strange master servant relationship of their own.  Two problems emerged quickly though when I began to break away from this treatment.  Giles really was afraid of her (for he could sense her power very early on and had an instinctive loathing for the woman who damaged his lord) and the Count was clearly the sort of man who would want Ilva for himself.   Oops. Miscalculation.

All that to say, the elven healer really never was needed xD.

I had three or four endings I had in mind.  Most of them involved people disappearing or dying.   Pretty much the only character who was spared torture was, in fact, Elanore.

In these endings, Ilva, Giles, and Edmund fared worst.  The guildmaster was also a humongous problem.

The rehabilitation of the Count, however, would not fare well if his past trauma kept repeating itself, so for the sake of having the “King” back , I left the poor man’s house of cards alone for the time being.

I’m sure there are a few things left unaddressed that bother folks.  Many of these are simply due to their resolution being out of the constraints of the timeframe or location. Some I need to let fester for another story arc :).