Chapter One:  How this mess came to be
When the world was young and covered with darkness, it was magic that helped people survive.   But magic was not an unlimited gift, and it could not all be expended on keeping the young human race alive.

The wise people appointed rulers to power. They raised a class of people to promote the welfare of their people.  How that was to be accomplished would be left up to the rulers of each part of the world.

In the turbulent and wild domains, their duties were to help their people survive.  Wild beasts were to be tamed or chased away, shelters were to be built and fortified, food was to be grown and shared.

Human cooperation did much to push back the darkness of the world.But as time passed, the people forgot the calling of the ruler.  Leaders became kings and queens, and titles became thrones.  Soon humans forgot their innocence, desiring their neighbor’s lands and valuables.

The rulers of Nod had become such people.

The king was not a particularly good or bad person.  He was quite ordinary with the exception of picking a wife who was far superior to him in looks and in ambition.  This had been done against the advice of his counsel of twelve.  He had been convinced really to do so by his own ambitious father, who saw the opportunity to ally Nod with its neighboring kingdom.

Thornewood’s youngest princess did not desire to be ruler of an isolated and quiet kingdom.  As Queen of Nod, she bore eleven daughters who could be promised to the princes of other kingdoms.  Many young men entered the kingdom to court them — ladies as fair and cold as the mother they resembled.   They discovered the beauty of Nod and began to covet the green farmland and riches of the kingdom.

Each marriage brought whispers of changes to come.  The Twelve watched the kingdom shift slowly as each new prince took the land he was given and taxed the people heavily.

And yet the Twelve could do nothing.  Although they were the last of their kind in the kingdom with any magic and were powerful enough to oust the king, they were bound to serve the family until exile or death.  As the foreign princes’ influence over the king grew, the Twelve’s powers decreased in kind until they themselves began to disappear. 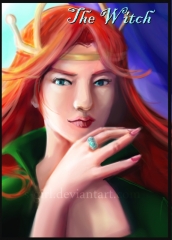 Only the oldest of the Twelve remained.   She had been the strongest of them all, a woman of an old magic rumored to have stood on the earth at the beginning of time.  Her name had once been Dawn of the East, but she was simply Melynda to the princesses she patiently watched over.  Someday one of them would marry a man who would be the new King — and these new rulers she would guide.

When a boy was unexpectedly born to the middle aged King and Queen, the infant prince set off a political earthquake that unsettled the unspoken truce between the ambitious princes.  Once Firinn was age, the throne would pass to him from whichever (if any) of his brother in laws held the throne for him.

And so the seeds for civil war were sown.

Sister turned upon sister as their husbands plotted to spill one another’s blood and consolidate their own power within the kingdom.  The wisewoman fled with the child deep into the kingdom while it fell to chaos.

The peoples’ blood flooded the once fertile soil and it became useless.  Strong, beautiful trees were felled by hands eager for firewood and weapons.  The villages were emptied; those able to fight were conscripted by the various militia to defend each small province or duchy. And in the chaos outsiders slipped in and kidnapped people as slaves.

With no food to harvest, no wood to build shelter, and an embattled king who could not  hear their cries, the last survivors fled for distant lands.  With each step those refugees took, they cursed the royal family. With each death, they cried for revenge.

In the end, the world listened and sent death to the family.

The King and Queen were first to go, pierced by a traitorous blade belonging to one of their son-in-laws.  Then their daughters and their children sickened from disease and poison while their husbands pillaged and burned the land, not willing to yield anything that might useful to their rival brother-in-laws.  Soon none were left.

The curse moved like a black shadow over the land, leaving nothing good and productive untouched.  It eventually came to the forests in which the woman had hid with the child, raising him as her own son.

It came cloaked in a dark hood as a lost traveler.  However, the lady saw past the mirage and recognized death with its shadowy tendrils. With her magic, she kept it at bay long enough to frustrate it and then bargain with it. She would not let it move until she had coaxed it into accepting her offer to bear part of the curse that should be the boy’s.

The old magic relented and its agent, the shadowy figure, would not kill the young prince but leave him in a deep sleep.  But because justice still needed to be served, his judgement was not cancelled, but simply delayed until his subjects returned to deliver that judgement themselves.

Until that time, the wisewoman would receive not only half the punishment but have her magic taken from her.

Left hideous and deformed by the shadow’s punishment, the woman had no choice but to summon the last reserves of her magic to place a thick forest of briars around it.

She rested while her young King slept, gathering strength for the day when someone would come their way once more.

For a hundred years, not a soul would come their way.