There is a lot of meat in this installment. So much so that I wanted to highlight some things for you and for me Dx.

I tweaked Part A to make it much clearer that this visit to the capital is a past instance and it is very early after Elisa came to the garden.  Given that her lifespan has been suggested to be nearly a thousand years, this is far before Wolfram was born.  This is, if you’re also trying to place “Unicorns Walk Among Us” into continuity, some time before that story.

The King of Elves

I wanted to give a name to our King of elves for there will be a few more that get dropped in to discussions centering on the Swans.

This King is Arin — for he is the “Enlightened” or “Light bearer” to his people.  By the time we meet him in Chapter 9  he has lived a very long wonderful life.  He is and probably will be the greatest of kings of elves for he was also a king of peace.

He has many children. MANY MANY MANY children. The elves aren’t really monogamous or so I’ve realized.

And so another peculiar thread appears to dangle here in this chapter.  It has been a long time for those of you who aren’t new.  References to the Black Witch or “a black-hooded witch” have appeared before.

The Book of Taliesen

The bard shows the siblings  a book — his own, apparently.  The story that the elves most wished to be true regarding this man was likely some variant of the Welsh legend. A translation you can consult that hints at what the elves hoped for would be Lady Charlotte Guest’s. (You can find a nice free one here.)

However, this Taliesen argues he is not like that … or at least not the super-guy described there.  Taliesen also appears in other ways in both history and literature hence there are multiple references to him.   Taliesen also is often confused with Merlin.

The meaning of the Weird elves names

Remember last week’s placeholder/minibonus?
It may be a while before I clean up the character pages, so thought you’d like to know who was who. 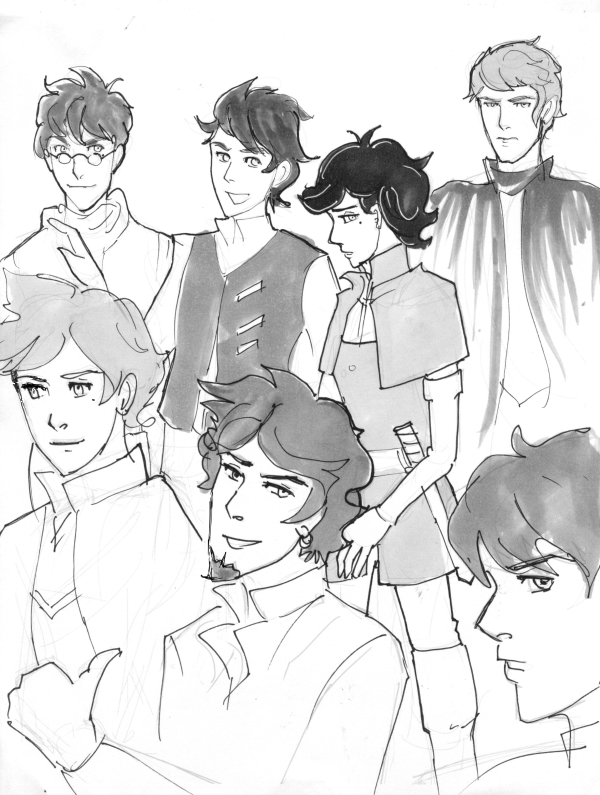 Taliesen turning fairies into ladybugs… in my mind, the ladybugs are intrinsically associated with fairies.  It’s an art joke I guess.   :3