I like Azul.  If the first book didn’t exist, he’d be the main protagonist of this entire series, unearthing mysteries, charming queens, doing cheap tricks as a street magician while doing massively powerful magic in secret. He’d have tea with old witches and have a girlfriend in every town.

Writing Azul in this chapter has been enormously fun because he is not like the other male leads in this pocket universe. He doesn’t sit and think a lot. He just sort of figures it out as he goes. And he doesn’t have a lot of baggage which the other characters have in spades. (Angst? I’m too pretty and cool for angst!)

This weekend I drafted a little bit more to the next section and am excited about fleshing it out next week!  Magic in the hands of Azul is very capable — very, very capable and far from everything we have seen thus far, save perhaps Selva.

This weekend was the first year I haven’t done AWA AA since 2006!  I did make it out there, however, to wander around and look for artists to commission.

For whatever reason I seem to have gone a bit nuts with Azul this time around.  I took several one-page sheets with character info around to see what would happen.

The strength of this piece by “Maggie Venable” (makkunata.tumblr.com) is she’s made Azul a very grounded, believable sort of being. I mean those awesome, solid inks are one thing but … WOW HOT LEADING MAN.  Seriously, why Elisa hasn’t accepted his offer already makes me very frustrated. Seriously? *ties her up and offers her to the elf* 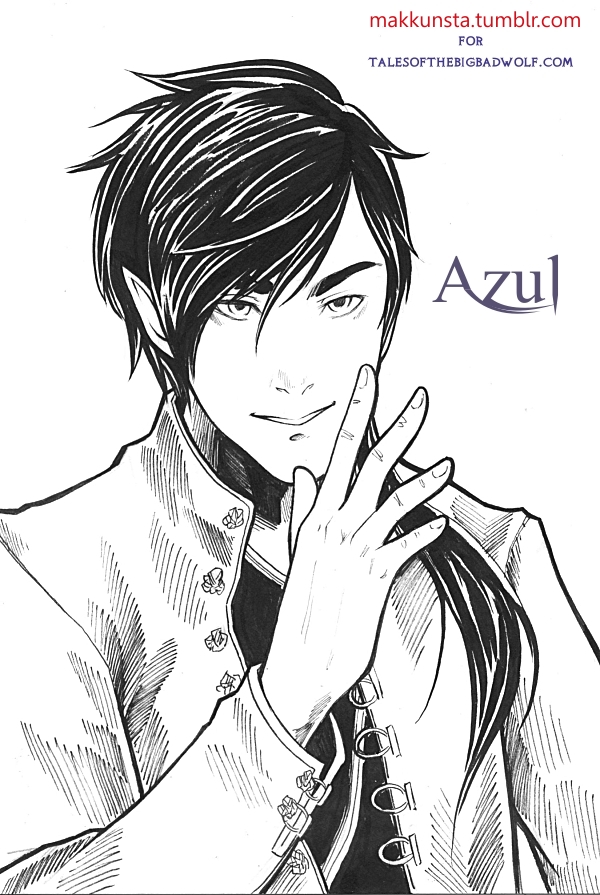