I have not really, truly drawn in some months. It was a pretty stressful 2013 and 2014 didn’t quite start off the way I had hoped. In any case, I’m trying to get back into doing art and being a bit more productive.  I won’t be doing any conventions other than one this year (unless by some miracle I get to be a table minion for other artists) and instead plan to focus on editing the print version of “Red Riding Hood.”

While doing this edit, I’m not doing major structural changes. I want this to be close to what most of you read in the first posting with a little cleaning. This print version is not primarily for new readers. It’s for those of you who do not like reading stuff digitally or do not have an e-reader.

As I said in the past, I want to finish a few books before I revisit the entire set of volumes and begin substantive reshaping. So far, the only deletions have been a sentence here or there whereby the narrator makes their presence known and provides information not needed for Book 2.

It is really interesting this time around. After one year off from the book I can see some of the flaws serialization creates.  When you’re tired or overexposed to your own work you don’t see critical problems with word phrasings or overuse of certain words. So far I have majorly rewritten parts of Chapters 9-12 and then provided that cleaner copy on this website. (If you find something still wrong, please do let me know. I’d be grateful!) I can also see the times I felt inspired and the times I felt like the plot queen.

I checked and it looks like I haven’t yet posted any new versions for CHapters 13-16.

Currently I am wrestling with Chapter 17. I encountered a problem with the point of view (i.e., head hopping) and that requires a clear head to fix.

In any case, you will see a tracker at the bottom of the right-hand column that roughly shows you where I am with the more critical edit.  I may also go back and put in some notes on “update dates” on the table of contents if I do anything major.

And for those of you who don’t care — random Oscar doodle last night.  I may marker color this next or digitally color it.  We shall see how my energy levels hold out for March :3.

Wolfram loves to smell Selva’s hair. I think his most developed sensory organ is his nose. Why her hair would smell different when she’s pregnant, I don’t know. Someone get him under control -_-. *hands you a bottle to squirt water with* 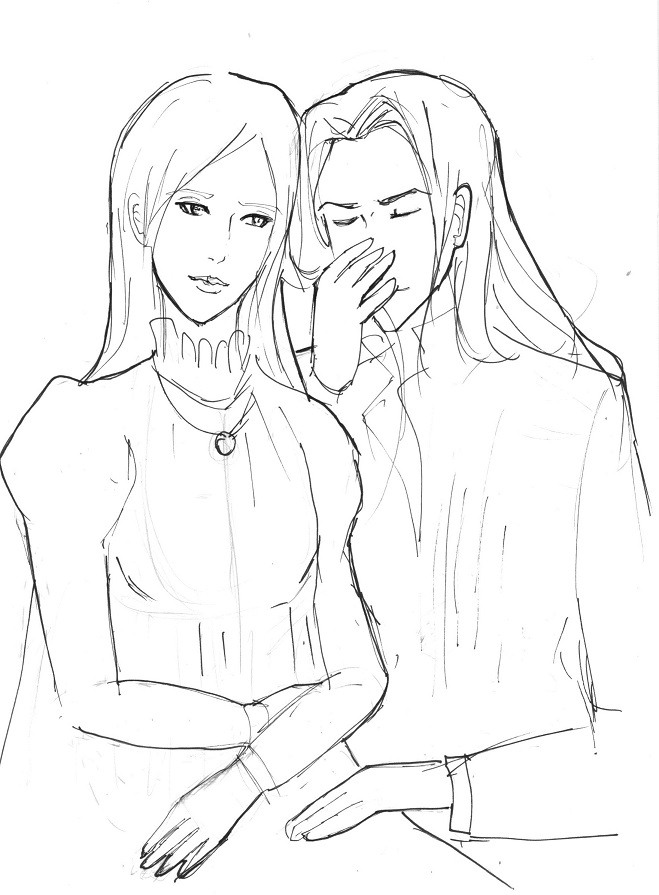