Hawk continued his way towards the castle, his sense of unease increasing with each step he took. Ice had frozen into elegant shapes — extending from the ground to sky in strange shapes that might have otherwise passed for finely worked metal sculptures in some of the human palaces of this world. But he could not enjoy the austere beauty of his surroundings or afford to admire its orderly design.

The man had traveled far into the domain of the Snow Queen — too far. By now, the guards should have come to question him.

The castle of ice loomed in the distance, a strange and unnatural presence.

A thick column of ice shot up from the ground, stretching to the sky. At some point, far above the earth, pieces of that column spread like tree limbs and cradled the castle between its branches.

The current castle had been built in the last few hundred years — created some time after the North wind had disappeared this way.

Word came from the rare travelers who passed through these remote regions that the powerful wind had become enamored with the Queen and taken up residence with her. The castle’s changes were his, the travelers insisted. It was built in the sky as a compromise to his preferences and as a means of keeping others at an even greater distance.

There ice elves also spoke of other odd occurrences. The Queen had herself stolen children from a village. Others said she was already dead, having been replaced by a witch pretender who roamed the snowy towers.

Some of these stories were simply that — or accounts from another time, another Queen. Hawk’s own mistress had called upon the lake to be certain each time something strange and unsettling came their way. She had turned up nothing — no reason to suspect that the Snow Queen had become corrupted or twisted.

But Hawk did not like what he had seen thus far. He saw no hint of order or security as he made his way towards the large towering castle.

In better times, in normal times, the way before him would have been blocked. No traveler would have come this far unchecked. He had walked to the edge of a glassy lake upon which the ice castle spires eerily reflected on the frozen water’s surface. He should not have been ignored by the bears who plodded towards the trees of ice that lined the lake in order to find rest.

“Hello,” Hawk spoke to them. Gradually he came closer, studying them for disease or enchantment. They remained disinterested in conversation, yawning like well-fed cubs before they went to sleep.

He was disappointed. He had heard of the noble bears who guarded this palace and looked forward to talking to them of the winter. There was nothing intelligent or intentional about these bears.

Again, he looked around. The lack of the strong, abrasive wind made him frown.

He had no choice but to move forward past them, seeking out some way up to the castle where he must make some demand to see this negligent Snow Queen. He found no steps.

He grunted, knowing he had no choice but to test his luck.

Hawk stretched, feeling for muscles that didn’t want to change. This was not an ideal time and place to become a bird. But he did not wish to dawdle foolishly in the cold.

He thought of the birds he so admired and then — as a bird — he leaped into the air, in spite of a lack of a good wind. He beat back the air and found his way around and up the icy column. He did not stop flying until he found a place to rest in the giant tree.

He sat in its branches for a while and waited for the guards to come. But he saw no one at his post, no one standing by the entryway.

The bird hopped over to the closed door and found it shut. Hawk shifted back to the form of a man in order to move the door. As he settled upon the ground and pulled the door open, the tree groaned eerily under his feet.

Hawk sensed that the structure was more vulnerable than he realized. His mind further considered the possibility that the Queen had long abandoned this place or she was dead.

Even so, he did not turn back. He stepped through the door, listening carefully for the sound of movement. Instead he heard a small thrum of energy — a hint that magic was not completely gone from this place.

Hawk ignored the small warning in the back of his mind that urged him to turn around. Stubbornly, he continued down the cool passageways to seek out the queen. The interiors began to darken and grow in height. Hawk found himself in more than one impressive chamber. He studied the blue cast of the walls around him and realized something lit the ice — something he could not explain.

For a long time, he heard nothing except the sound of his own steps, echoing throughout while he walked around. But the castle began to dim as the sun outside began to set. And then he heard the sound of whispers from far away.

He was not frightened by them, for he was familiar with fairies and the kind of creatures that frequented places where strong magic users resided. He followed the sounds until they suddenly stopped.

Hawk’s keen eyes saw the opening to the hallway a few steps beyond him . He paused at the hole just tall enough for him to enter. A soft glow came from the hollowed-out space inside.

The man knew this was too convenient. But he saw the figure encased in ice ahead of him.

His eyes widened in recognition and he sped to the icy coffin. He beat against the cold ice. 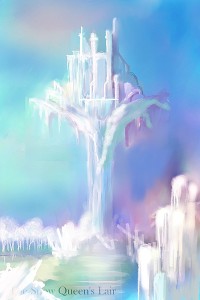 The strange castle in the sky

The Queen of Swans had emerged from her cottage this morning with purpose. For several days she had belabored over what the lake had offered to her and what it refused to show.

It was clear where it had turned its attention, to the degree that it had become almost uncooperative in showing much else.

Elisa’s inquiries into her guards’ whereabouts had become futile.

Hawk was but a blurry dot against a deep blue sky — gone where she had not expected.
Azul and the child had moved beyond where there was water. Her poor Sova had also disappeared.

Why this was the case, she did not know. She could speculate the lake did not wish for her to seek them out. Worse, something might have emerged, interfering with its powers.

The Knight had known as soon as he saw her attire that she meant to leave the safety of the Garden. “It’s better to summon the winds to you,” he attempted to dissuade her. “They can bring you information.”

She did not address his request. Instead, she summoned the fairies and fed them the last of the odd cakes that Azul had left behind. She gently caressed them and amused them before she finally told them their duties.

The Knight watched her, perturbed as she issued her orders.

She knew he did not understand her plans. He knew only that she worried over the lake and what it refused to say to her.

“I go to their mother,” she finally answered him. Elisa stood from the ground and dusted off her clothing. She smiled as she received the first of the items the fairies would bring her.

It took almost a dozen of them to bring her the large vial — crafted with the finest glass left hidden in the garden. She would fill this with water from the lake.

The ones that appeared shortly thereafter moved far more slowly. They were weighted down by something heavier — namely a sword and scabbard. These items and their twins had been gifted to her by the now deceased king of elves for the rescue of his beloved unicorns. She thrilled inside as her fingers gripped the hilt and scabbard. And the sword warmed as she affixed it in place at her side. “We go,” she said sharply.

Elisa repeated herself, softening her voice as she saw her guards gathering around her with open looks of dismay and suspicion.

They did not recognize her.The gentle woman she had been — the priestess and seer of the lake — had been firmly put behind her. “Pack for a long trip,” she ordered them. “The old woman, mistress of the winds, awaits us.”

It was the east wind that came for them. He laughed at their faces, particularly that of the rooster who squawked noisily about his fear of heights.

East was none too gentle as he threw them up onto his back and jumped through the trees before taking to the sky.

These guards of the queen dared not complain however when Elisa said nothing. They did not even protest as East flew straight towards the sun, taking them far above the mountains until the point they gasped for air.

Mercifully East returned to flying at a much safer height above the earth until he brought them to the foot of a volcano that sat where the land and western seas met.

It was above this sleeping giant–far above the clouds –they went. There was nothing soon to see except the top of the volcano itself and the opening in its side. An old woman swept something out of the cave while the wind aimed for her.

When he stopped short, the four travelers tumbled onto the ground and at her feet.

Elisa was, for once, the first to stand. She bowed low before the old woman.“It has been a long time, Mother.”

The old woman who was the Mother of the Winds squinted. “No, no. You were just here last week with your brothers?” Her eyes turned to the other men, standing awkwardly on the small ledge of the cave. “But these are not them.”

Elisa winced. “I have not seen them in long.”

“Ah,” the old woman frowned. “They’re always running around looking for something to do. My eldest is the same — he has become quite irresponsible as of late and does not come quickly for he knows I shall box his ears the next time I see him. Have you seen him?”

The Queen of Swans shook her head gravely. “If I had, I would tell him to return home so you might not worry.”

“Yes, that naughty boy is just as bad as his brothers. But I suppose you did not come asking for him. So what’ll it be?”

Elisa replied. “I would ask your help in finding someone for me.”