The Count’s behavior would be odd for a human but not a Wolfram. They were neither men nor wolves. These halflings could assume shapes of both quite well, enough to fool those who might hunt them.  But they could not fit in with the ways of either for very long.

This would not have been a matter of concern had the estate been empty. However the nearby town’s residents had taken refuge there during the long period of darkness to avoid the shadow monsters of legend. Among these humans were hunters who wisely stayed inside while the halflings roamed the grounds.

One hunter did not.

Edmund Ormond ran along the wall. Although his noble face was hidden by a scarf and cap, the stone lions that guarded the estate grounds recognized him and followed him closely.

Most mornings he trained alone with only the lions to comment on his progress. He would watch the Wolframs in their drills from afar. When they caught him watching, they glanced away.

This morning the creatures of magic carried on a one-sided conversation with him. Their chatter stirred up a light breeze every time they spoke.  The hunter finally stopped under the skeleton of a tree and they joined him, waiting to see what he might do next.

A cold nose pressed against his gloved hand. Edmund looked down at the stone lion who had sought him out.  The lion roared greetings –a great friendly sound that shook the ground under the man’s feet.  And then its tail began to switch back and forth as it looked around the young man. “Where is Elanore?”

Edmund’s mouth quirked up into a smile at the mention of the name.  He placed a hand on the creature’s nose. “Resting, Gawain. As are your brothers.”

Gawain made a strange noise of indignation. “We do not need to rest.”

He did not argue with him. The lions weren’t flesh and bone and often forgot how easily other creatures tired. Instead he offered the lion another pat on the head. “While you choose to lie quietly they can use the yard for training. That helps them tremendously.”

His wise words cheered the lion.  The beast ceased its complaints and contented itself with being scratched upon the head. The two stood companionably for a while and watched the odd training exercise the wolves were undertaking.

A small shift of the wind put Edmund on guard.  The lion’s stiff posture and the alert look on the faces of the Wolframs told him something was prowling the yard. His heart began to pump quickly as his fingers reached for the blade at his side. And then he saw a tell-tale blur swiftly moving his way.

Edmund raised his sword in time to block the downward arc of a cane. His sword glanced off the improvised weapon with a metallic pang.

He had known that it was reinforced with a delicate metal frame but he now was certain it also had a metal core. The hunter fell back to consider this information and his attacker. “And a good morning to you.”

Count Wolfram snorted at the sarcastic greeting and offered a few additional swipes of his weapon.

Edmund parried each attempt while making sure to keep his opponent in front of him. He knew the man would not harm him (much).  However, he could not afford to allow the lord to score an easy victory when the Wolframs were finally watching.

The elder gentleman disappeared into the younger man’s blind spot.

Edmund twisted about sensing the danger, ducking in time to avoid an upper body blow from the cane.  His legs protested as he did so.  They were already tired from his morning run.

The young man put distance between himself and the Count, hoping to find a few seconds to let his mind consider what to do. But the Count disappeared again in a blur.

Edmund reacted without thinking, his leg swinging around and bringing his foot to the back of the man’s knee.  He bought himself half a moment to secure another blade — a rather strangely curved one that had come as a gift from the Lady Selva. He hoped to try a two-sword approach on his opponent.

Once the blade glinted in the sunlight, the lions stirred.

The Count stepped back. He took care to move quite far from Edmund’s reach before he bowed, putting the tip of his cane on the ground. “I suppose this match is yours.”

Edmund did not trust the man’s words or the strange light glimmering in the man’s eyes.  He waited before he carefully sheathed both of  his swords.

The lions swarmed about him whispering something of a warning. Edmund glanced around and realized the wolves’ eyes had drawn into slits.   A premonition of trouble came to him, but before he could speak Gawain scolded Maximilian Wolfram.

Lord Wolfram was unused to the lions’ open defiance.  He dismissed his cousins before he walked over to the lion to address its  noisy statements. “First you all complain that I ignore him. But now that I train him you  complain that I should not provoke him so?”

Gawain’s stone eyes stared at his master. “The path of blood is not what your lady wishes for him.”

“And yet she gave him that sword,” the Count said sharply as he turned his glance Edmund’s way. “Do not question me, but her.” He waved the lions off.

The lions scattered but did not go far.  Edmund knew they continued to keep watch over him as he sat down under the tree,  exhausted by the match.  Their tails switched back and forth, observing as the Count came to stand near him and inquired whether he needed assistance.

The hunter shook his head.

“You should not have pointed that blade at me,” Wolfram offered while he swung the cane restlessly back and forth. “Elven blades do more than just wound your opponent. Some have known effects. Others, like yours, depend much on the bearer. If you wished to kill, it would have aided you in doing so.”

Edmund quickly corrected the lord.  “That would not be my intent,” he stated strongly.

“I did not think so,” the lord answered.

Their conversation lapsed into an awkward silence. Outside of fighting they seemed to have little in common, little that would help these two men form some sort of understanding of the other.  Edmund glanced up at the older man and cleared his throat, intent on trying to do something, anything to improve the situation between them.  Politely he inquired after the Lady Selva’s health.

“She is well.” The man seemed pleased to have something to converse about. “Her strength is remarkable. And her spirits are very good. I have left her resting in the study quite content.”

The smirk that accompanied his last statement was particularly toothy. Edmund had come to understand that wolves were completely open about their affairs and this statement might be even reassuring to the Wolframs. They  desired stability — and a happily mated lord was far better than one who was constantly alone.   But he could not help but frown.

Maximilian Wolfram blinked at Edmund’s expression.  “And why do you find fault with this? Did you not tell me at one point that her happiness was important to you? She is your–”

The younger man interrupted. “What amuses your cousins doesn’t amuse humans. Their love can be easily lost if she loses their respect.  What you boast about freely can hurt her position.”

“Does it matter what they think? She and I are fine the way we are.”

Edmund was appalled at the man’s self-absorbed way of thinking. “She is not indifferent to other peoples’ feelings as you are.”

The older man tapped his cane on the ground, considering the point before he glanced Edmund’s way once more.  If something had occurred to him regarding Edmund, he did not reveal it.  Instead his attention moved elsewhere.

Edmund scrambled to his feet as he, too, saw the dark-haired woman approaching.  The “Elanore” the lion had spoken of was now advancing quickly towards the two men.  His hands moved to catch her as she flung herself into his arms.

“Hello!” She said unnecessarily by way of greeting.

His grey eyes lit up as he looked into hers, full of some secret delight. To him she was fresh and lovely, always full of optimism and hope. He did not know how she found the strength to be that way but had vowed he would never try to change her.

Even if she pinched his nose.

“Stop!” He tried to disentangle himself from her, laughing. “I can’t breathe if you keep doing that.”

She waved her arms about, trying to trap him by the tree. “Your face is damp. You’ve been training, haven’t you?”

He moved his head out of her fingers’ reach. “I’m fine or I would be fine if someone wouldn’t stop my breathing!”

The Count stared at this lovely greeting gone terribly wrong. He cleared his throat, intervening before a wrestling match spawned right under his nose.  “I did not scratch him in our sparring practice.”

The young lady narrowed her eyes at the mention of sparring. Immediately she began to inspect Edmund for any hint of injuries.

For a moment, the young man was relieved to find his nose was safe. However, as her fingers began to drift in every which direction — including down the front of his chest —   Edmund grew quite hot and bothered. “Elanore,” he choked out as he saw the lions drifting closer and a smirk forming on the Count’s face. “We are outside. And we have company.”

She blinked at him owlishly before she looked around her and realized how things might appear. The young woman’s face flushed redder than the cloak she wore. Elanore stepped back with her hands in the air, smiling nervously.  “He’s fine,” she declared loudly to anyone who could hear. And then she dropped her voice to speak to Edmund only. “You should hurry inside. I came to tell you that the friar is waiting for you.”

With that news, Edmund forgot his manners as well. He grasped the woman’s shoulders and studied her dark eyes for any hint of worry or trouble. “Is he safe?”

Her hands drifted to his waist and she could not help but smile. “Yes, he is. He has had a rough trip here,  I think.  But he saw the ring and  wished  us both well. Then he asked to see you right away.”

Now Edmund understood why her eyes had been dancing when she first came outside. Fueled by a sense of relief, he ignored their audience and leaned in for a kiss.

As she pressed against him, the kiss lingered much longer than it should have. He could not help himself, nor should he. That kiss openly declared that she belonged to him just as he belonged to her.

And as he left her standing there under the tree, it left her breathless. 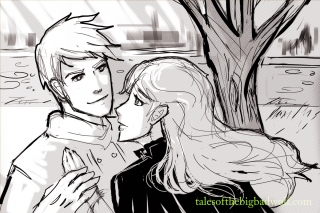