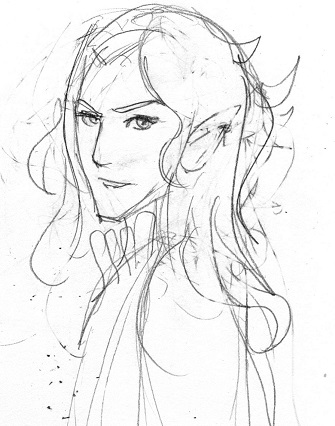 Elisa’s meeting of the Prince does not go particularly smoothly.  For those who are keeping track of elven stuff

@FairyTwister Greetings from the northern lands and congratulations to 100 followers. http://t.co/LCvH179FAz

This wonderful tweet came at me last week. This week I caught up to Sir Grimoire who informed me that this piece was related to this story!  It was his significant other who somehow found me at Anime Weekend Atlanta and cued him into the first book.  This mysterious thumbnail is part of a larger work that he is creating to cover all the “Tales” stories thus far!   After looking at that first link he attached to his tweet, he kept shocking me with other thumbnails of increasing complexity and detail. (So pretty it hurts.)

These are some of the breadcrumbs he’s been dropping so far:

I’m really excited to see the final piece! I keep checking my Tales twitter account every day hoping for new thumbnails to ogle :D.   Sir Grimoire is very kind and  if some of you are on Twitter, say hello to him. His artwork is otherwise featured at http://squareenixmembers.webs.com/Grimoires_Corner.htm

As a follow-up, you can see the post describing the final art  here.